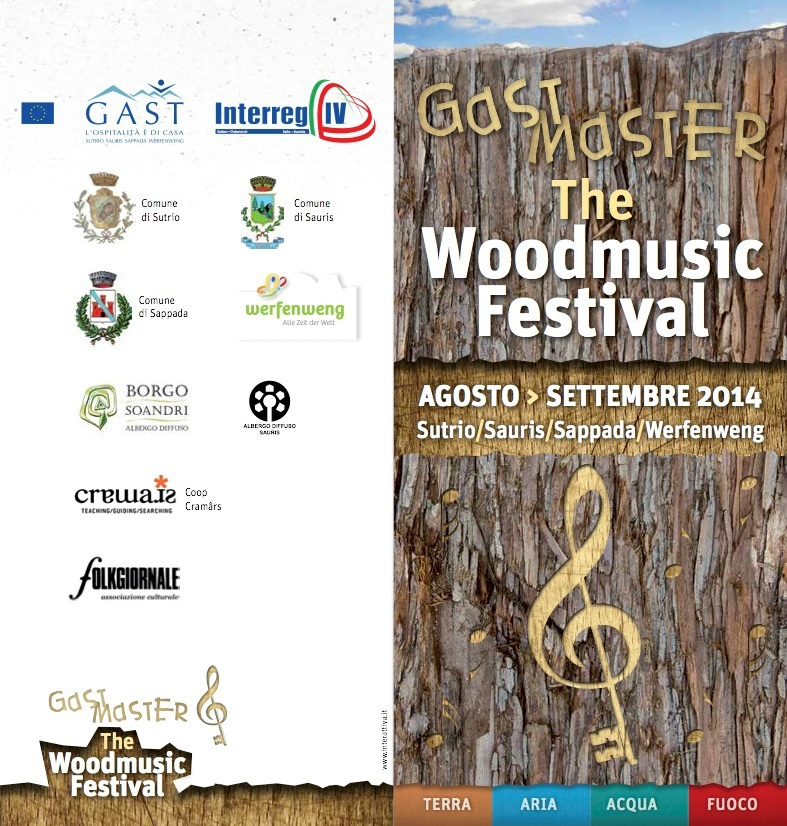 In Sutrio, Sauris, Sappada and Werfenweng (Austria) two forms of hospitality have been developed, "Albergo Diffuso" and "Zimmer Frei", realities strongly contextualized and integrated in the community that synthesize culture, history and traditions. The Interreg IV Italy Austria GAST Project, lasting three years (2011-2014), aims to encourage the promotion and consolidation of the tourism sector.

The ultimate aim will therefore be to involve the entire village in the offer of a complete and attractive tourist product, transforming it into a "Hospitable Community". Once consolidated, the model proposed in the "GAST" project must be promoted and disseminated in the territory. To do this there will be used events of high tourist interest that will allow a wider dissemination and sharing. The events proposed within the GAST Project for the promotion of the model have a close link with the culture, tradition and gastronomy of the area.

GASTMASTER is, in absolute terms, the first WOODMUSIC FESTIVAL in the world. His goal is the following: to play and sing the wood with which the Alberghi Diffusi (AD) were built, the connected tourist facilities and the musical instruments of our popular music. The tourists of the GAST partner Municipalities (Sauris, Sappada, Sutrio and Werfenweng) will thus be able to live a unique tourist and musical experience.

In the Italy-Austria cross-border area, GASTMASTER will organize 12 events. The festival will include three Masters / Workshops dedicated to the theme of Music and Alpine Wood, and 9 music events where there will play musicians of proven professionalism.

Its marketing strategy will be clear and linear, essentially from a cross-border perspective: GASTMASTER’s mission is to bring the music of the forest and wood back into our countries, close to our diffused hotels and our host communities. As we know, the GAST Partner Municipalities have been able to keep an authentic environment alive with the woodwork of the Albergo Diffuso.

Great space will be reserved for Italian and Austrian artists and wood artisans from the INTERREG Italy-Austria intervention area.

The 2014 edition of GASTMASTER focuses on the existing relationships between wood and the four elements. All this, in an Italian-Austrian perspective that will take place through an ongoing collaboration in the event schedule.